Changes for a Better EV Life: Where for art thou, CHADeMO?

Having driven CO2 Fre for over a month now, I feel I can now safely make some recommendations for change that would make my life infinitely easier.<  Some of these things I've been writing about long before I purchased my Nissan LEAF; I knew going in some sacrifice would be required for the greater good.  That's not to say there aren't great things like the burgeoning Charging Infrastructure and wonderful LEAF features to help get me through the day!  But there's always room for improvement and if you don't speak up, nothing will get done.

Granted, the LEAF SL has a TEPCO plug and CHAdeMO support, so it can theoretically be charged from 0% to 80% in twenty-five minutes.  But CHAdeMO stations are few and far between currently and even with with the 350Green announcement of 47 new Charging Stations in the Baltimore and D.C. regions, if I recall only 5 of those will be CHAdeMo. 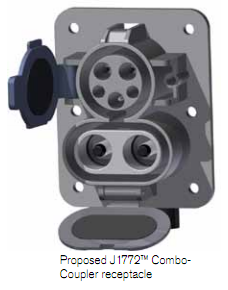 Fortunately, 350Green chose CHAdeMO as the Level 3 standard they and aren't going with the the odd-ball SAE proposal currently floating with the J1772 plus two prongs below it for the direct current connection of Level 3.  On the one hand, CHAdeMO is the de facto standard because it has the most stations and the most cars that can accept it.  But right now, those numbers aren't big and if the SAE comes up with something cheaper and car manufacturers or EVSE makers decide to take a risk on following the official recommendations, it's possible over time CHAdeMO could be the BetaMax over the SAE's VHS.