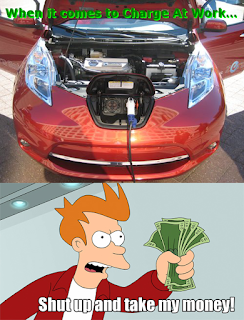 Mr. TimeHorse's Wild Ride and how he tried to save the Virginia Environment

On Tuesday, 3 February, 2015, members of the Virginia Advanced Energies Industries Coalition (VAEIC) will be gathering in Richmond, Virginia for Clean Energy Lobby Day (CELD) 2015.  The event is in co-operation with Virginia Clean Cities and the Maryland, District of Columbia and Virginia Solar Energy Industries Association (MDV-SEIA)—who produce the rather repetitive and wordy Solar Flare newsletter.  A number of industries in the energy sector are also sponsoring CELD, including Dominion Virginia Power, Solar City, Prospect Solar, Standard Solar, and Columbia Gas of Virginia; a complete list of sponsors is available on the official CELD page above.

Unfortunately, none of the bills under consideration in the Commerce and Labour committee solve the many problems Electric Car drivers face in the Commonwealth of Virginia, which I hope to summarize in a subsequent article.  None the less, it's my desire to be a part of events like this, but usually I need to be at the job and those silly AdSense ads (sorry about those) aren't gonna pay the bills.  However, due to some abuse I received at my job to which I reacted exceedingly poorly I happen to have the day off so it's absolutely my plan to be there tomorrow.  That is, to drive to Richmond… 115 mi (185 km) away… in #CO2Fre Nissan LEAF… which is lucky to do 80 mi (130 km) on a good day… at 05:00 in the morning… in 20℉ (-7℃) weather… and naturally no heater…

Fortunately, thanks to the folks at NRG eVgo, various Nissan Dealers and Greenlots (not to be confused with Gringotts, though they can be just as pricy), I have some hope.  First, I plan to use ECO routing to get to Pohanka Nissan in Fredricksburg, VA.  From there I should be able to get straigt to Richmond, however, it's possible that the Level 2 plug at the Richmond Omni Hotel will be in use (I plan to call from Fredricksburg to make sure), so as a backup I'll hit the CHAdeMO at Mac's Service Center in Ashland, VA, which is part of Greenlots.  I should therefore arrive in Richmond around 08:00, or so I hope.  Fortunately, the Virginia General Assembly building should be about a 5–10 minute walk from the Omni.

I should be able to bring #CO2Fre to 100% charge at the Omni by 12:30, so if anyone needs the EVSE I'll be happy to move my car during lunch; I need enough charge to get back to Pohanka and have some left over for my next two stations.  Once I'm charged at Pohanka the second time, I plan to drive all the way up to the Alexandria, VA NRG eVgo CHAdeMO.  Then, it's all the way over to the Gateway Overlook in Elkridge, MD for a third CHAdeMO session.

My hope is, after the CHAdeMO in Elkridge, I should have enough energy to visit my friends in Laurel and then drive straight home.  At least that's the hope…

Anyway, as I was saying, I'm planning to go down to the General Assembly on Tuesday, with a focus on a couple of environmental bills before the Commerce and Labour committee.  Specifically, I'm focusing on 2 bills before the committee.

Electric utilities; costs of solar energy facilities.  Authorizes an investor-owned electric utility that purchases a solar power generation facility located in the Commonwealth consisting of at least five megawatts of generating capacity to recover the costs of acquiring the facility, with an enhanced rate of return on equity, through a rate adjustment clause.  The rate adjustment clause for recovering such costs may be based on a market index in lieu of a cost of service model. The measure also states that (i) the construction or purchase by a utility of such a solar power generation facility and (ii) planning and development activities for solar energy facilities are in the public interest.

The idea of this bill is to give an incentive to electric utilities which buy solar power facilities within the Commonwealth.  It sets a minimum capacity of 5MW so that trivial purchases don't qualify for these incentives.  The only problem is that it doesn't say much about third-party interests in terms of the initial construction of a solar generating facility.  But otherwise, this seems like a good thing and something I'm happy to support.

Natural Gas Conservation and Ratemaking Efficiency Act; cost-effective programs.  Requires the State Corporation Commission, when determining whether a natural gas conservation or energy efficiency program is cost-effective, to base its determination upon an evaluation of a portfolio of programs as a whole and not upon an evaluation of a program or measure on an individual basis.

The idea here is that we want the elimination of non cost-effective programs to be based on whether their elimination would make the whole package of incentives and benefits more cost-effective rather than subtracting one element and because it's removed some other benefit is hindered and thus the net effect could be worse than keeping the seemingly single less-effective subsidy in place.  By allowing the State Corporation Commission to take the entire package into account, it's hoped that conservations programs can be added and removed with a guaranteed overall net benefit.  This is why I support this bill.

Of course, these bills aren't the only reason I'm trying to make this insane trip to Richmond, Laurel, and back again.  In July, I'm planning to go to my 5×5 joint High School reunion, up in West Hartford, CT, a 360 mi (580 km) journey with, hopefully, no 4½ hour stop-over like in Richmond.  Now that's gonna take some planning!