On 3 February, 2015, I had only two things I wished to accomplish: Attend Clean Energy Lobby Day 2015 in Richmond, Virginia and visit with some friends in Elkridge, Maryland.  On any given day, Elkridge would be tricky but doable and Richmond would be a trial but to do both in one day, some might call me insane.  Yet that's exactly what I did and thanks to LEAF Spy I can take you on that journey with me, through all the slow, meandering drive at 06:00 to the frantic search for the Richmond Omni Hotel to a relaxing sunset in Stafford, VA to the mystery of the South-West beltway to a dash to be home before midnight.  So come with me along an exciting journey of 302 mi (486 km) in one day in #CO2Fre Nissan LEAF.

In the maps below, not only is my route shown, but my State of Charge is indicated by the colour of the segment.  A green segment represents a near complete charge, a yellow segment a battery at 50% and a red segment is pretty much just the infamous turtle

Slow and Steady Wins the Race

I had intended to wake at 05:00 that morning but ended up oversleeping and was not on the road until about 06:00, much to my chagrin.  None the less, I knew it I could make it to my first checkpoint of Pohanka Nissan of Fredericksburg, 61 mi (98 km) from home.  Ideally, I could have gone farther but that was the last CHAdeMO before Ashland, VA—19 mi (30 km) from Richmond—which is 97.9 mi (157 km) from my home and thus to risky for #CO2Fre in my experience.  So Fredericksburg it was and to be absolutely safe I used ECO routing which meant, as you can see on the map, I avoided the Capital Beltway and stuck to the lesser roads in more or less a straight line.

I got stuck behind a couple school buses on the way there but fortunately I passed by one just before his lights flashed so no Class 6 Misdemeanor on my permanent record for me.  Other than that, the drive was uneventful and although I missed the turning and took a little time to find the CHAdeMO, I plugged in and set my timer for 30 minutes.  Little did I know these CHAdeMO units, unlike the NRG eVgo run units, will not stop after 30 minutes and can run until your LEAF is full—which is good because often times the CHAdeMO will cut off before reaching 80% because of the 30 minute timer.

Not charging to 100% in Fredericksburg, however, would lead to some dire consequences.

I was running late so I decided to forsake ECO routing and book down to Richmond as fast as I could.&nbps For a spell I could see an unmarked car pacing me though so I avoided going too fast.  As I approached Richmond, ideally, a mere 53.3 mi (85.8 km) from where I started, I noticed my battery capacity dropping precipitously and began to slow my roll.  First, I slowed to 10 mph (16 kmph) below the speed limit.  As I lost another state of charge bar, I went down to 20 mph (32 kmph) below.  By the time I was down to my third bar I was going only 25 mph (40 kmph) on I95, desperate to make it.

I finally crawled into Richmond about 15 minutes late for my meeting with Delegate Robert Bell, and I still needed to park.  I had sunk to Very Low Battery by the time I got near the hotel and had only about 6 GIDs left according to LEAF Spy.  I just needed to find the hotel where I could charge my car using L2 since I planned to be in Richmond for several hours. 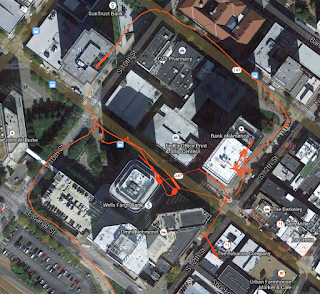 The LEAF navigation got me within about a block of the Richmond Omni Hotel so I knew I was close.  As you can see, I circled and circled East Cary Steet, South 12th Street, East Main Street, back down 10th Street and round again.  I eventually pulled into the Bank of America with the turtle clearly visible on my dashboard and LEAF Spy reading only 5 GIDs left.  I knew from experience that at 4 GIDs the LEAF goes dead and you need a tow and the last thing I needed was to be stuck in Richmond, meters from my target, late for my appointment, waiting for an hour for a free tow to the nearest charging station and the 2013 Nissan LEAF leaves little room between 5 GIDs and the deadly 4—if you see the turtle, usually it's too late.

I finally parked in the Bank of America lot and called the hotel for directions.  After going around the parking lot one more time, and paying for just passing through, I spotted a standard, NEMA 5-20 wall plug at the parking lot exit.  I pulled out my charging paraphernalia and set my custom EVSE to draw 16A from the 20A socket.  Unfortunately, because of the cord length, I ended up blocking the exit to the parking lot so when I car did try and exit, I had to pull out my 100 foot (30 m) extension cord and move my car to get out of the other car's way.  I parked in a reserved spot, ran the cord along the exit road and resumed charging.

Eventually, the Richmond Omni Hotel and I were able to work out where I was with respect to the hotel and so I unplugged at 6 GIDs again and made my way, finally finding the hotel on South 12th Street a block below where I was.  I rolled in and hotel staff directed me to the EVSE.  I was saved, but alas, was an hour late for my legislative meeting and ended up profusely apologizing to Delegate Bell's staff since the delegate had already left for a General Assembly session.

As I had some time to spare on the top floor of the legislative building, I decided I'd stop in to see my own Delegate, Tom Davis Rust, who gave a heartfelt speech a few days later when he announced his retirement this year.  Delegate Rust and I had a nice, social chat and I must say his staff, Shane in particular, was very helpful and I owe him a personal thanks too.  Delegate Rust and I didn't speak much as I had another meeting to get to, but I will say from the bottom of my heart, we may not have agreed on every issue, but I will say it's very rare you meet a somone with office with the integrity and intelligence of Delegate Rust, and I know I'm not the only one to feel that way.  We'll miss you, sir!

Hybrid Drivers and their Holier than Thou FUD

It's funny how a coddled, privileged and very vocal Hybrid Car driver minority will do anything to make sure they keep every perk they've maintained for the past 20 years even to the exclusion of newer, greener technology like pure Battery Electric and Plug In Hybrid Electric vehicles.  Indeed, many of those drivers will do anything to maintain their sense of superiority by producing Fear, Uncertainty and Doubt, FUD, in the face of obvious facts to the countary.  Recently my friend at Virginia Clean Cities had got a letter from a Hybrid driver who was worried about the I66 HOV in Virginia was going to switch from HOV-2 with a Tier 2 Clean Fuel exemption to HOT lanes with an HOV-3 requirement to waive the toll.  Or course when you're spoiled by a right that is discriminating against folks more worthy, you'll do anything to keep those more worthy out while wishing to maintain your undeserved right.

Don't get me wrong, I like the Single-Occupancy HOV easements, I just think we need to step out of the twentieth century and into the twenty-first.  Hybrids are yesterday's technology and EVs are the wave of the future.  They're cleaner, more energy efficient, cheaper, let you fill your pack in the comfort of your own home and also run on 100% domestic energy.  Yet Hybrid drivers are obsessed with making a case that EVs are as dirty as hybrids by citing the downstream sources of pollution when comparing EVs to Hybrids yet ignoring where one's petroleum comes from.

It took me a few minutes to calm down enough to respond to the FUD this coddled Hybrid driver was throwing in my face, but eventually, I tried to respond in the most reasoned way I knew how.  This is what I said:

Dear [name removed], please don't be blinded by the propaganda.  What you just said is naïve in the extreme because it posits the idea that some how petroleum comes magically to the pump with no consequences.  I know exactly what Dominion Virginia Power's energy mix is, an Electric Car can be powered by Solar and even if not a driver can buy a 1.3¢⁄kWh Rider which requires Dominion to generate that much electricity from Renewables only.  But even in the worst case, the Prius is dirtier than a LEAF:

Even at 50 mpg the Prius is 14% more polluting than a LEAF on regular Dominion.  I'm sick of lemmings thinking they can compare where electricity comes from without taking into account the pollution from refining, disasters like the Exxon Valdez—when we're smack dab in the middle of the anniversary—as well as the deepwater horizon that nearly destroyed the shrimp economy of Louisiana, and folks clamouring for more of the same in the Alaskan Arctic and all the terrorism we're funding not just in the places you know but in places like Nigeria and Boko Haram.  You do realize that a plurality of the foreign oil used in this region is coming from Nigeria?

The long and short of it, I am greener, and can be much, much greener.  Can you power your car with photovoltaics?  I didn't think so.  And what's more, your car is just gonna get dirtier and less fuel efficient over time whereas Dominion is constantly installing cleaner power sources making even the worst case energy requirements cleaner over time, not dirtier.

Before you go spouting FUD, try to learn the facts first, please, dirty-prius driver.  Thank you however for being cleaner than a Ford F150.  Now can we move on without any more ad hominem attacks?

Okay, I'll admit it was a bit harsh of me to accuse a prius of being dirty.  It is, of course, probably the most fuel-efficient non-plug-in car available outside of diesel—oh, but what a hybrid diesel could be.  It's just that, clearly EVs are cleaner, from a little cleaner (on the standard Dominion Virginia Power fuel mix) to infinitely cleaner with a solar array.  So can we finally stop with the fuel source FUD?

Note: The above slides come from my failed February 4, 2014 lecture which I had been planning to give during the Electric and Hybrid Vehicles seminar for the Osher Lifelong Learning Institute of George Mason University, however the slides had not been ready in time.