Last Friday, a woman calling herself Amanda on the MyNissanLEAF forum posted an urgent request for help in organizing the distribution of one hundred Level 3 Charging Stations.  Needless to say, this caused quite a local buzz as these would be the first L3 Chargers South of the Mason-Dixon Line East of the Mississippi, outside of Tennessee and certainly the first in the Mid-Atlantic region.  Between that and my copy of the Diablo III Collector's Edition arriving it has been one incredible weekend for this EV Reporter! 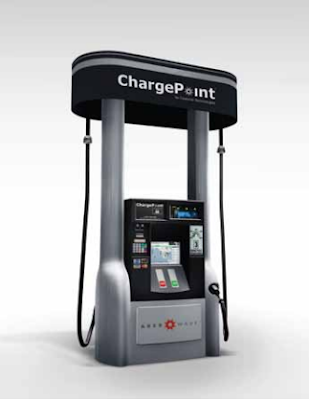 Amanda reported that the stations in question will be the ChargePoint Level 3, CHAdeMO / SAE J1772-DC dual-gang equipment as pictured.  While the QuickCharge Wars rage between TEPCO's CHAdeMO and the SAE's J1772-DC extension heat up, this unit hedges its bets by supporting both, making everyone happy.  Great choice!

After a bit of digging I found more information about the company Amanda represents.  Thier full name is actually EV Green Stream and they're a Baltimore-based company.  I spoke with Zack at EV Green Stream and he confirms they're looking for homes for about 30 or so units, but nothing is concrete until contracts are signed.  However, some urgency must be added because they need to have signed documents by 1 June so it behoves us all to help out and make sure those wonderful L3 stations find homes that our Nissan LEAFs and Mitsubishi iMiEVs would like to visit!

You are very astute or just read the comments and realized that we were in fact being taken for a ride.  You see, on Monday, after I'd posted this, Amanda amended her request to say that in fact it was one hundred Level 2 stations being installed, not Level 3.  Yes, she confirmed Level 3 on Friday even after someone posted a link to the unit pictured above, but what's done is done, and now we know the truth.  Level 2, though great, is pretty common in Maryland and to a lesser extend in Virginia—less so in Washington D.C. since most of the units there are in garages that aren't even opened on weekends.  None the less, we should all help to give these Level 2 stations homes even if they're not quick charging.

But there is a catch; the locations must conform to the following rules:

So, no locations in Virginia, Deleware, West Virginia or Pennsylvania!  Also, note that Amanda estimates the cost of installation to be about $3,000.  As for the electricity cost, we know the LEAF for instance takes about 20kWh to go from 0% to 80% on a quick charge (more like 16kWh according to some posts in the MyNissanLEAF forum) and at 13¢⁄kWh that's only $2.60 at Level 2, the Nissan LEAF draws about 3.8kW of electricity so in one hour that represents about 49.8¢ based on 13¢⁄kWh, the regional average rate.  For the Ford Focus Electric with its 6.6kW charger, it comes to about 85.8¢ but most EVSEs can't put out more energy than that so at $1.00 per hour, you won't be making the LEAF and Volt (3.3kW) drivers happy but at least the Focus Electric folks are getting their money's worth.  Overall not a huge loss for the free advertising you get on sites like PlugShare.

Now, for me, my main goal would be to see them put in at the National Harbor, where they held the first Nissan LEAF event in the area and as the perfect first rest stop on the I95 corridor in Maryland going North.  I've also suggested Maryland House and Chesapeake House—need to contact HMS Host about that— but they don't really make sense for Level 2, only Level 3 as people don't stay there for hours.  Others on the MyNissanLEAF forum have suggested the US Route 50 corridor and I would add the I270 / I70 corridor and a site around Bethesda.  Finally, I'd suggest one in Silver Spring where we hold the EVA/DC meetings, though alas not the Library as the Library isn't a commercial business—and hopefully not The Blairs if they're gonna have the same connectivity problems the current EVSEs there do.  What would you suggest?