My LEAF has wings!

At 9 o'clock in the morning on Sunday I strangely received a text message from a surprising source.  You see, since July of 2011 (as well as during a brief period in December 2010) I've had my e-mail set up to forward all messages from Nissan to my iPhone as text messages to keep me as up to date as possible with respect to the progress of my potential future ride.  Some of these messages have been bsnal, though the one telling me I could order in July was a real treat.

Thus, I was quite delighted to receive a message from Nissan indicating that my Owner Portal had opened up.  As soon as I could, I logged into my dashboard and saw to might delight the last panel opened on my customer dashboard.  Unfortunately, I don't have a picture of this for you because…

A long, long time ago

You see, when I tried to put a deposit on a LEAF back in the late afternoon of 20 April 2010, I decided to be proactive and set up an account on the Nissan Dashboard site in preparation for the reservation site activation.  When the message finally came for me to activate, I logged into the account I had created and associated with my mailing list e-mail, but my reservation panel wasn't opened.  I tried to get the panel to activate but it just wouldn't budge.  I had to click a link in the original e-mail which took me to the dashboard would have forced me to create a new account.  Unfortunately, because my desired login name was in use (because I'd just created that account), it wouldn't let me use that name.

I called Customer Service for the LEAF and they admitted it was a flaw in the design and there was nothing they could do.  Clearly, in the quest to create a turn-key solution for their customers, they neglected to use the standard website practice of allowing a user to either create a new account or log into an existing account.  The woman from customer service thus advised me that if I wanted to make a reservation, I'd have to create a new account.  I asked Nissan Customer Service if I did this, how I could switch the reservation account to the account I originally intended, the one I'd created earlier that day.  They told me it was impossible.

So irate I was, and so desperate I was to get my order in, I hastily choose the rather rude name FuckYouIAmTimeHorse just so I could access my dashboard and put a reservation on a car.

Despite the unfortunate situation with the naming for my account on the Dashboard, Customer Service had assured me this account wasn't permanent and I could still choose my own, custom name when I set up my owner's portal.  And so I waited…

Fast forward to Sunday, 25 September 2011.  Having received my text, and read the e-mail on the phone, I attempt to visit the Owner's Portal site.  Of course, like before I'd previously set up an Owner's Portal account in anticipation of this day so I was eager to finally, once and for all, hook my LEAF up into the proper account and user name.

I clicked the link in the e-mail on my phone to go to the Owner's Portal page, but, unable to either hook it into my existing account or assign the account the proper account name, I was stuck.  I thought maybe it was a limitation of the iPhone, so I tried my Linux server.  Still no dice!

Clearly it was another case of a turn-key solution that forced new account creation rather than allowing the option of logging into an existing account.  This was all the more insidious for the fact that Nissan may have other customers with existing cars on an existing Owner's Portal account: there be no way for these customers to link their cars into a single account either.

So, although I was able to see whole new areas opened up on my Customer Dashboard, I couldn't properly activate the Owner's Portal site.  I was absolutely thrilled that I could finally see my future car's Vehicle Identification Number (VIN), but I just couldn't get it associated with the right account.  Sigh.  I'd have to wait until Monday.

Jesse to the rescue!

Monday turned out to be a rather busy day at work so I couldn't call Nissan customer service until on the drive home from the job site — hands-free, of course!

So I call up customer service and I get in contact with my old on-line chat customer service friend, Jesse.  At first, Jesse's like you made your bed now lie in it.  You created the rude name, now you gotta live with it.  This made me incensed, and rather than using my polite protocol of just referring to the name as rude, I said it out loud and angry, no doubt much to the shock and surprise of my co-workers as I was leaving the office that day!

Jesse and I chatted and chatted and we went over my entire customer service history.  At first they didn't have any records going back before the Electric Drive event where my video was misplaced for a week.  Eventually, Jesse started coming over to my side; he was earning a 5-star rating!

Jesse did some research and after much digging and earning a sixth star, eventually came up with a solution.  After hemming and hawing about how to make absolutely sure we moved the right car to my proper Owner's Portal account, we finally came upon an identifying factor and low and behold, Jesse worked a miracle and a seventh and final star!  My car was now listed under my official Owner's Portal page!  Hooray!

Relieved to finally have this issue resolved, Jesse presently had some final warnings for me of which I should take heed or face my own peril.  Yes, the vehicle was now on my Owner's Portal site.  Yes, I could now activate CARWINGS.  Yes, I now had everything ready and all the information my dealership would need to take ownership of the car, hopefully, in the scheduled month of November.

But from that point forward I am now forbidden from ever visiting my official Customer Dashboard again!

So long my Customer Dashboard

I would never again see that friendly, last box, or be able to view my preferred dealership or, most importantly, my expected arrival date!  All the information I have about my car from this point forward is through the Owner's Portal.  Unless I get an e-mail indicating a more precise date for the delivery of my car, I have to fly blind.  So I'm relying on you, my fellow late-July orders, and my friend Justin at Nissan of Chantilly to keep me apprised of any new developments in the batch of cars that hopefully will contain my Cayenne Red LEAF among them.

But as all things must eventually pass, so to can opportunity prosper.  On Tuesday I was finally able to set up CARWINGS, as you can see from the image below.  Progress, my friends, as my first, true EV moves ever closer.  And in perhaps a mere 8 weeks, I'll be driving zero-emission — and my LEAF will have Wings! 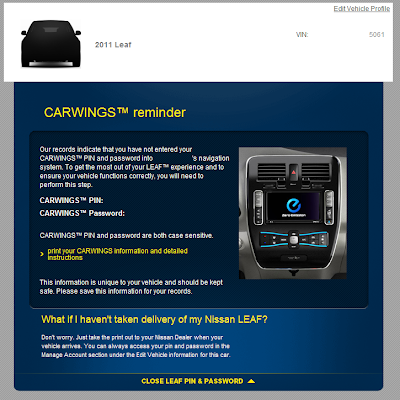 Of course, all this assumes I take possession of this enigmatic LEAF.  Then again, I could just wait for next year's model.  After all, I still have the original Customer Dashboard account I created back in April 2010…