My friend Mindy is the proud owner of the first, number 1 of 250, absolutely fresh off the factory floor, before any other in all of the American Hemisphere, Smart For Two Electric Drive.  She is the Gudy / Olivier (alt) of the East Coast and quite frankly my hero!  Now, Mindy didn't create Azureus but like Olivier, who took ownership of the very first consumer-level production Nissan LEAF on 11 December 2010, Mindy signed the lease that would make history.  At the Smart Dealership in Tyson's Corner, Virginia, Mindy braved the the nightmare Washington Snow Day of 26 January 2011 to attend an event featuring Penske Automotive Chairman Roger Penske And Smart USA President Jill Lajdziak.  And as a show of the tremendous dedication of Mindy to the Electric Vehicle movement and the Electric Vehicle Association of Washington, can you guess what Mindy did after the ceremony?

Well, sir, what she did was load that brand, spanking new first in the Hemisphere Smart Electric onto a truck and have it carted into Washington, D.C. for display at the Washington Auto Show!  Now that's dedication! 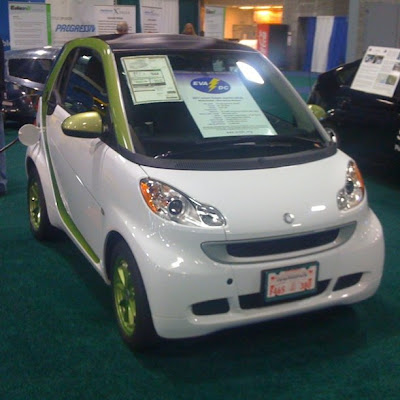 An interesting question (well, technically an aspiration) is posted at the end of the article about Mindy's car linked above:

Now, as anyone who spends 5 minutes talking to me knows, I'm in love with the idea of going Electric and living off-grid on Solar / Photovoltaic, Geothermal and Wind energy.  I'll probably never be able to achieve that in my lifetime, but it's a deep-rooted aspiration for which I pine — if only my HOA would approve Solar Panels… but that's a story for another day.  As it is, I thought it worth replying to FuzzyDemons to try and instill some reality in our collective dreams of free energy and decided to post this response, which I reproduced for you here:

You really should visit us at the D.C. Auto Show where you can see Mindy's car and sometimes even Mindy in person at the EVA/DC display ( http://www.evadc.org/ ).  You'll recognize us by the spider-translucent Tesla Roadster and the RAV 4 EV from the Wikipedia Page; but what I want to point out to you is the Solar Prius that our friend Bob Bruninga constructed right next to Mindy's Smart for Two EV.

You see, the Solar Prius has a number of photovoltaic cells covering its entire top surface, including the hood.  Now, solar cells have advanced in the years since he's done this but turning sunlight directly into electrical potential is a tricky business.  So don't be surprised when I tell you that after 8 hours in the sun, Bob's Prius gets about 4 miles of additional range.

You see, the surface area of a car is pretty small.  Yes, a well-constructed vehicle could increase its surface area and lessen its weight to achieve much better range from sun, but to really get a car solar-powered, you're best off putting panels on the roof of your house and installing some large marine batteries to capture that energy during the day so you can feed your car from it while you sleep — or simply take advantage of Net Metering.

So, can solar panels on the car get you to work, or the store or the mall?  Probably not.  But they can contribute to your overall savings, which is definitely good.

As for generators in the axles, that's just Regenerative Breaking; the Smart Electric already has that.

Now just to clarify, the Solar Prius gets about 1/2 per hour of sunlight, so at 8 hours of sunlight per day, that translates to 4 miles.  Of course, the sun can shine more than 8 hours, so as usual, your mileage may vary.

There's an interesting story from the Washington Auto Show Press Event on Thursday, 27 January 2011.  I was watching over the Bob's Solar Prius when I spotted Victoria Riess of Planet Forward with her professional camera equipment taking video of the black car.  Happy to help if she had any questions, I approached her and then agreed to an interview.  Unfortunately, that was first time I'd ever seen the Solar Prius and didn't yet know much about Bob's amazing work!  See, Bob is a physicist so you know whatever he did has got to be extremely clever; he also has a really fetching hat!  In fact, Bob has a lovely placard on the side windows of his Solar Prius explaining how he did the work of creating this piece of engineering beauty.  So, naturally, my interview was pretty bad, to say the least, and so don't be surprised if it never sees the light of day.  However, Mindy was there also, minding her number 1, first, extra special Smart Electric — one of only 3 at the show, apparently!  3 Smart Electrics but only one Nissan LEAF?  The mind boggles, but there were other interesting cars there that I'll save for a later report…  In any case, I suggested Victoria interview Mindy as a better candidate for Planet Forward since she's the Gudy of the Smart Electric community and, quite frankly, also my hero.